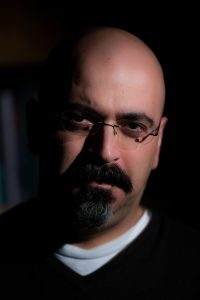 Tolga Tüzün (Ph.D.) is an electro-acoustic music composer and a performer.

He started taking classical piano lessons at the age of eleven. After receiving his BA in Political Sciences, he studied composition with Pieter Snapper and Marc Wingate and advanced orchestration with Ilhan Usmanbas and Hasan Ucarsu at the Istanbul Technical University, Center for Advanced Music Studies.

During his studies for a Ph.D. in Music Composition at CUNY Graduate Center, he studied composition with David Olan and Tristan Murail in New York, and with Philippe Leroux in Paris. He participated in master classes with Roger Reynolds, Rand Steiger, Edmund Campion, Mara Helmuth, Horacio Vaggione, Hughes Dufourt, Joshua Fineberg and Brian Ferneyhough,

He has given lectures on music theory and electro-acoustic music at international conferences.  Between 2003-2005 he taught harmony and composition at Brooklyn College Conservatory of Music.  Tolga Tüzün participated in the composition and computer music course at IRCAM during 2005-2006. His compositions have been performed in various cities throughout US and Europe.

Tolga Tüzün is a full professor at Istanbul Bilgi University where he teaches composition and electronic music.